The monosandwich process was developed in the 1990s by Milacron and enjoys increasing popularity as an easy variant of multi-component technology. Today, it’s no longer just about using cost-effective recycled materials in the core of the component. Reinforced core materials give the component greater rigidity, whereas foamed core material provides good sound- and vibration-damping properties while contributing to low component weight. Depending on the requirements, visually attractive and soft materials can be used for the skin surface. 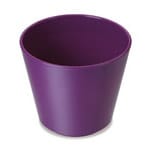 Monosandwich uses a standard injection-molding machine equipped with a secondary extruder, mounted either vertically or horizontally. The core component is initially plasticized in the injection units; subsequently, the secondary extruder extrudes the surface material into the injection unit barrel. The melt flows from the nozzle of the extruder thru an opened shut-off nozzle of the injection unit and forces the already plasticized core and the screw against an adjustable back pressure until the set plasticizing stroke is achieved. The materials in the cylinder are not mixed together, but rather are two separate melt pools stacked behind one another in the injection unit barrel. When injected, the two materials necessarily flow into the cavity one after the other, resulting in the inflowing melt initially solidifying on the outer wall as surface material, while the subsequent component then forms the core of the molding.

Our application engineers will gladly assist you in the development of your product.

Uniloy.com is your source for information on our blow molding products, services and contact information.

Stay on the Milacron site